Bansang Hospital was built in 1938 and stands deep in the African bush, 200 miles from the coast. It is the main referral hospital for the Central and Upper River Region of The Gambia and is responsible for the healthcare needs of 600,000 people including those trekking from countries such as Senegal and Guinea – Bissau. Many patients travel long distances on horse carts, arriving with life threatening illnesses that require urgent, specialist treatment.

Many of the ailments, viruses and infections are consistent with extremely hot & humid equatorial zones. Malnutrition, malaria, pneumonia, diarrhoea, anaemia, snakebites & burns are just a few of the conditions requiring treatment.

Prior to the charities inception in 1992, Bansang was a hospital without hope. Nearly a days drive from the coast, it was a seemingly forgotten place; one which suffered from the fiercest of environments as well as an acute lack of hospital provisions. There were few drugs available to the patients, and even fewer cannulas with which to administer them. Patients would endure operations without anaesthetic, only to then face ‘recovery’ on mattresses sodden with decades of detritus, and in wards that were absolutely overwhelmed. Rats and cockroaches were rampant, emerging at night to feed on patients saliva, saline drips and wounds. To have ventured to Bansang in those dark days was to venture to one of the world's very darkest places.

The injustice of those early years seared itself on to Anita's heart. She would often return to England suffering from shock, night tremors and insomnia. Those experiences galvanised her and drove her to achieving things that are far above and beyond anything delivered by the major charities. Anita's tireless commitment has helped draw together an incredible coalition of international assistance whose support has transformed the hospital. The horrors of old have given way to a clean, bright and welcoming establishment. Dank and forbidding wards have been dramatically altered or replaced entirely. There isn't a part of the hospital which hasn't benefited dramatically from the incredible variety of support delivered since 1992 (have a look at the 'past successes' menu on this page to see just some of the things 'we' have achieved)

What makes us different:

Where the BHA is absolutely unique is in its approach to the staff at the hospital. From the very earliest years of the charity, Anita recognised that retaining and motivating staff was absolutely key to delivering sustainable healthcare in such acutely challenging conditions. From the gardener to the chief executive, every single member of staff is valued, supported and invited to contribute towards the ongoing development of the hospital. This cooperative approach has had truly unparalleled success. The hospital has retained 100% of its staff for the period 2012-2014; a feat unmatched anywhere in Sub-Saharan Africa.

It is a strategy that Anita has implored the large charities to adopt. They have yet to do so...believing instead in the primacy of donating equipment and new infrastructure. Africa deserves so much more - we want every major charity to look at Bansang and learn from what we have achieved here. Affordable healthcare IS an achievable aspiration, even in the very poorest and most remote locations. We want Bansang to be a blueprint for the rest of Africa; one which demonstrates that it is possible to deliver effective healthcare to everyone.

YOU can help us:

The BHA is committed to giving Bansang Hospital a bright and sustainable future. If you share that vision, please take a look at the ways that you can help contribute. 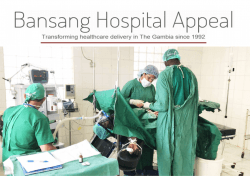 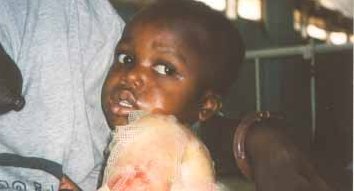 Click on the image to read about Anita's first visit