Anita receives an Honorary Fellowship from the University of Northampton 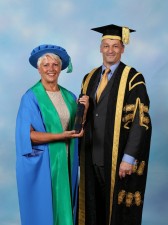 The University of Northampton has presented Anita Smith MBE with an Honorary Fellowship at this year’s Summer Graduation Ceremonies.

In 1992, Anita who lives in Orlingbury, Northamptonshire, visited the Gambia for a family holiday and had experiences which led her to devote her life to improving healthcare delivery in Bansang, located deep in the African bush 200 miles from the coast. She founded the Bansang Hospital Appeal and has worked tirelessly ever since to reverse the hospital’s once terminal decline.

To date, over 47 shipping containers of supplies have been donated from her charity work in the UK. Achievements include; the building and equipping of a brand new 80-bed children’s unit, with the further redesign and refurbishment of other hospital wards, the refurbishment and installation of operating theatres, the installation of a hospital-wide computer system, modern obstetric suite, along with sustainable medical equipment throughout.

Anita recognised that retaining and motivating staff was key and in 2008 she received an MBE from Her Majesty the Queen for services to healthcare. Every single member of staff is valued, supported and invited to contribute towards the ongoing development of the hospital.

The charity also arranges for international volunteers to work in the hospital allowing them to gain skills and improve practice. Anita’s intervention at Bansang has meant that communities across the entire region have been saved from losing loved ones to preventable causes.

On being awarded her Honorary Fellowship, Anita said: “When I first opened the letter saying that I had been awarded an Honorary Fellowship, I couldn’t believe it! I just have to say that it is a huge privilege, a great honour and my family are all very proud. The graduates today have a huge advantage over me; you have the medical background, you have this wonderful university where you have been studying and you can go that step further than me. The world is so much smaller now and there are no boundaries for where your career is now going to take you.”

Professor Nick Petford, Vice Chancellor of the University of Northampton, commented: “In addition to celebrating the outstanding achievements of the graduating class of summer 2014, we are also recognising high profile individuals who have collectively impacted, directly or indirectly, many millions of people worldwide through their acting, music, charitable activities or the social enterprises they run. These recipients of honorary awards will, no doubt, motivate our graduates as they go out into the world and transform lives and inspire change amongst all those who come into contact with them.”

We'd love to hear from you... Cancel reply

This site uses Akismet to reduce spam. Learn how your comment data is processed.

Be part of the story…donate :)